In every demographic, geographic, and socioeconomic context, mental illness devastates communities. When untreated, the costs to society – not to mention those felt by individuals themselves – can be staggering. Rates of homelessness, incarceration, and drug abuse are unusually high among those with mental disorders, all complicating an already difficult to manage situation.

Drug abuse, in particular, poses a problem to the mentally ill. When substance use precipitates the progression of addiction, it gives rise to an entirely new diagnosis (a ‘substance use disorder’) to be addressed – one that can complicate the clinical picture and potential treatment of any pre-existing mental condition. Mental and substance use disorders become inexplicably intertwined in a web of cause and effect that proves difficult to untangle.

We visualized the most recent data from the Substance Abuse and Mental Health Services Administration (SAMHSA) in order to illustrate the relationship between mental illness and substance abuse, as well as to explore how mental health services in the U.S. treat this comorbidity. 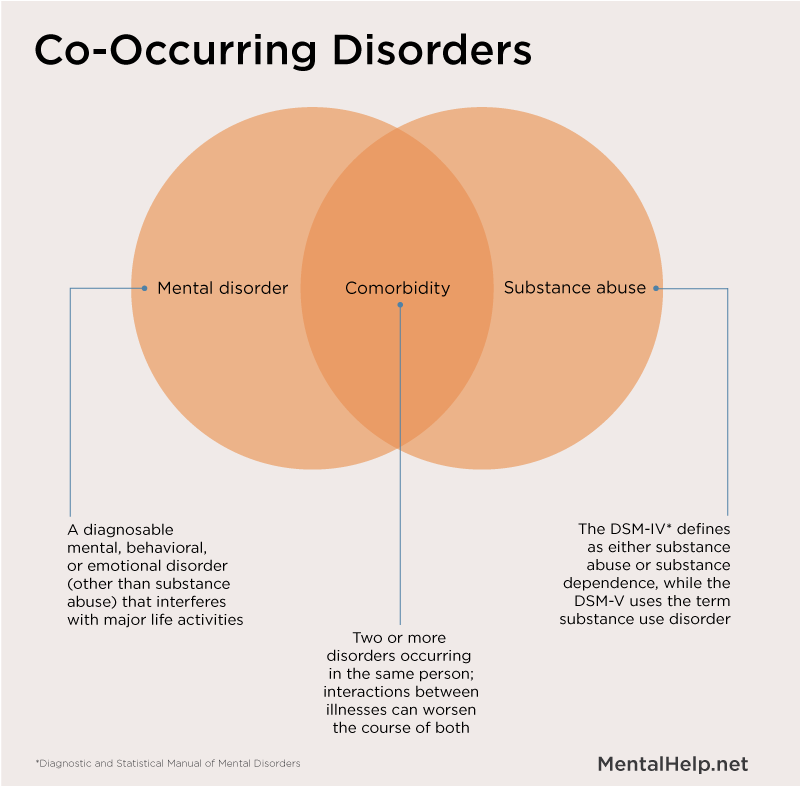 Individuals who struggle with mental disorders experience a variety of symptoms –  mental, behavioral, emotional or combination thereof – that can cause a significant amount of distress or interference with daily functioning. While the SAMHSA National Survey on Drug Use and Health makes a distinction between mental disorders and substance abuse to focus on their correlation, it must be emphasized that addiction is also a diagnosable, progressive mental illness. Drug abuse essentially rewires both the stress and reward systems of the brain, reinforcing a compulsivity that persists despite negative consequences.

Two or more mental illnesses that occur either at the same time or at different lengths of time are considered comorbid, or co-occurring. The collision of multiple disorders – especially mental and substance use disorders – worsens the course of both, exacerbating their symptoms and longevity. Mental illness and substance abuse commonly co-occur, but their relationship – whether based on correlation or causation – remains difficult to establish.

It’s frequently difficult to tease out the precise interplay between substance use disorders and co-existing mental or behavioral health conditions. Fortunately, though – and even without knowing a definitive cause-and-effect relationship – treatment approaches are able to simultaneously target both issues. Many substance abuse rehabilitation centers incorporate dual diagnosis treatment as a fundamental part of their recovery program. Call 1-888-993-3112Who Answers? to speak with someone about locating a dual diagnosis treatment center. 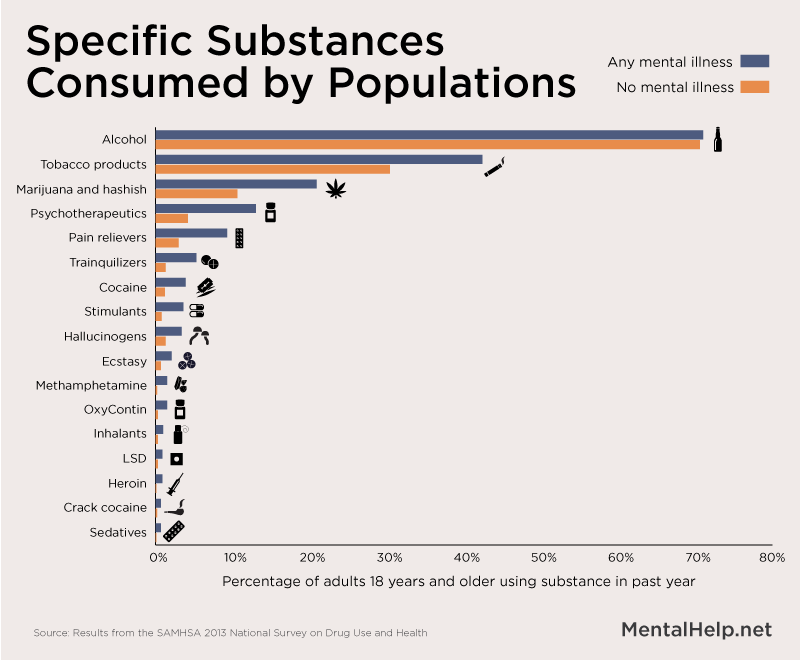 Across the board, those with a diagnosable mental disorder (excluding a substance abuse disorder) are more likely to have consumed drugs in the past year. These substances range from the legal – alcohol and tobacco – to the illegal – stimulants, opioids, and hallucinogens, among many others. Alcohol is the only substance with consumption levels very closely matched between both individuals with mental disorders and those without, perhaps owing to its legality and prevalence in Western society and culture.

There appears to be a very clear correlation between mental illness and above-average drug use. One theory is that those with mental disorders use substances to self-medicate their symptoms. For the most part, drugs produce psychotropic effects that ease the emotional distress caused by mental illness; however, these effects are short-lived. To continue alleviating these symptoms, a person must consume increasingly higher amounts of the substance. This use can quickly escalate to substance abuse or dependence.

Abuse or Dependence by Drug and Mental Illness 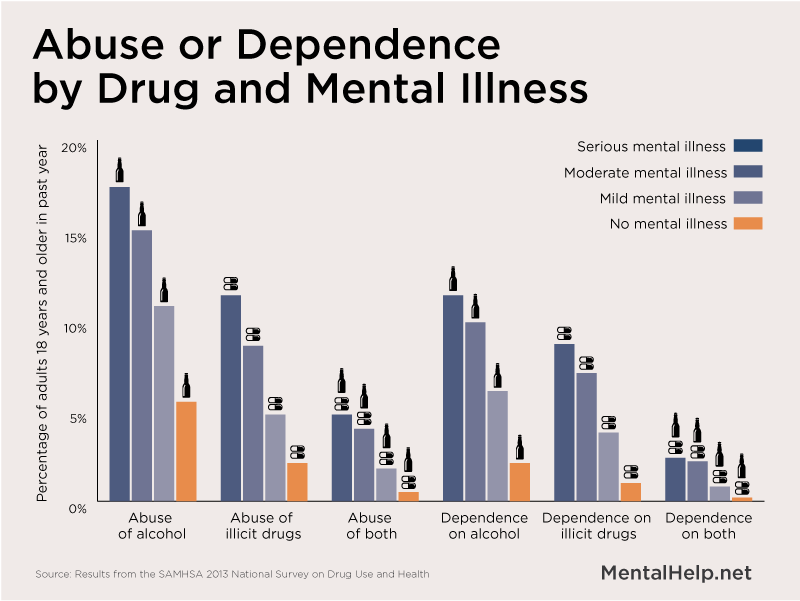 The SAMHSA survey divides mental disorders into three categories based on their severity of impairment: mild, moderate, and serious. It also classifies addiction as either substance abuse or substance dependence, which are the terms the DSM-IV (Diagnostic and Statistical Manual of Mental Disorders) uses. However, the recently updated DSM-V merges the two under the umbrella term of substance use disorder to clear up any confusion.

When accounting for the severity of mental illness as it pertains to substance abuse and dependence, another pattern emerges. Respondents with more severe disorders are more likely to have abused or had a dependency to alcohol, illicit drugs, or both in the past year, perhaps supporting the self-medication theory – the more severe the symptoms, the more drugs are required to mitigate these symptoms.

Or, on the other hand, this theory could be reversed: Substance abuse or dependence, in altering the brain’s chemistry, could cause emotional distress similar to other mental disorders. In other words, drug abuse could lead to secondary psychiatric conditions. It’s difficult to determine the order of causation.

Comorbid disorders prove difficult to identify and evaluate. Depending on which symptoms are more severe, one disorder might be treated secondary to the other. For example, if the consequences of drug abuse outweigh those of a mental illness, the individual might end up in a detox, rehab, or other drug treatment center that specializes in addiction.

Of the 1.3 million client admissions to substance abuse facilities in 2012, one-third were diagnosed with another mental disorder; 35.1 percent were admitted for abusing one drug, 31.2 percent for two, and 29.3 percent for three or more. However, these numbers may be low. Some treatment centers either don’t provide mental health services or don’t screen for additional mental disorders upon intake. This becomes problematic when a client’s mental disorder goes undiagnosed and later contributes to a relapse in addiction, beginning the cycle all over again.

One of the biggest issues in the treatment industry is that the approach to addressing co-occurring disorders is lacking. Both disorders must be treated together, but they’re often treated separately.

Encouragingly, an increasing number of specialized drug and alcohol rehab centers are now focusing their treatment efforts on those with dual diagnosis conditions. Suffering under the weight of a dual diagnosis should never preclude seeking effective substance abuse treatment. To find out more information about programs that can simultaneously address substance abuse and mental health issues, call 1-888-993-3112Who Answers?. 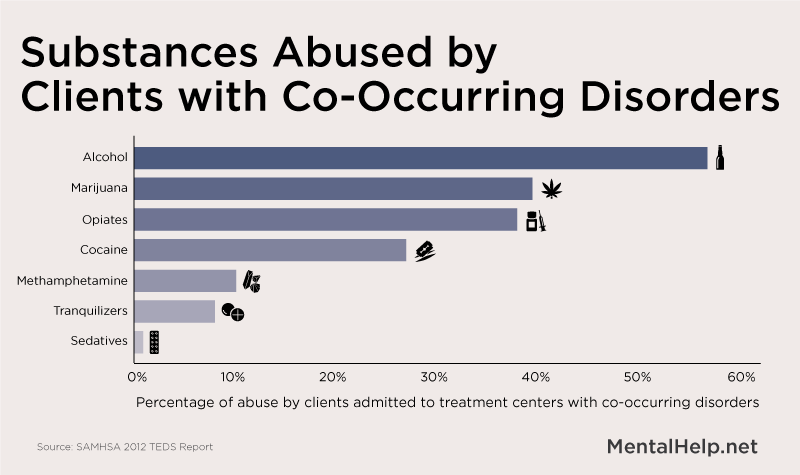 Of these clients in drug treatment centers with comorbid disorders, over half were treated for alcohol abuse or dependence. Again, many of these clients abused more than one drug, so alcohol could be just a part of that equation. Marijuana follows, then opiates, cocaine, and methamphetamine. Tranquilizers (defined as benzodiazepines like Xanax, Klonopin, and Valium) were below 10 percent, while sedatives (defined as barbiturates like Amytal, or sleep aids such as Restoril and Halcion) added up to only 0.9 percent of drugs abused.

This ranking of most-abused drugs by clients with co-occurring disorders follows the order of drugs on the “Specific Substances Consumed by Populations” graph, with just a few outliers – for example, tranquilizers rank higher on the “Specific Substances” list than they do here, beating both cocaine and methamphetamine. Still, the similarity between the percentages of drugs most commonly used and drugs most commonly abused by clients with dual diagnoses further suggests that use of these drugs, when paired with another mental disorder, can lead to abuse or dependence and land clients in drug treatment centers.

Number of Clients at Drug Treatment Centers per 100k 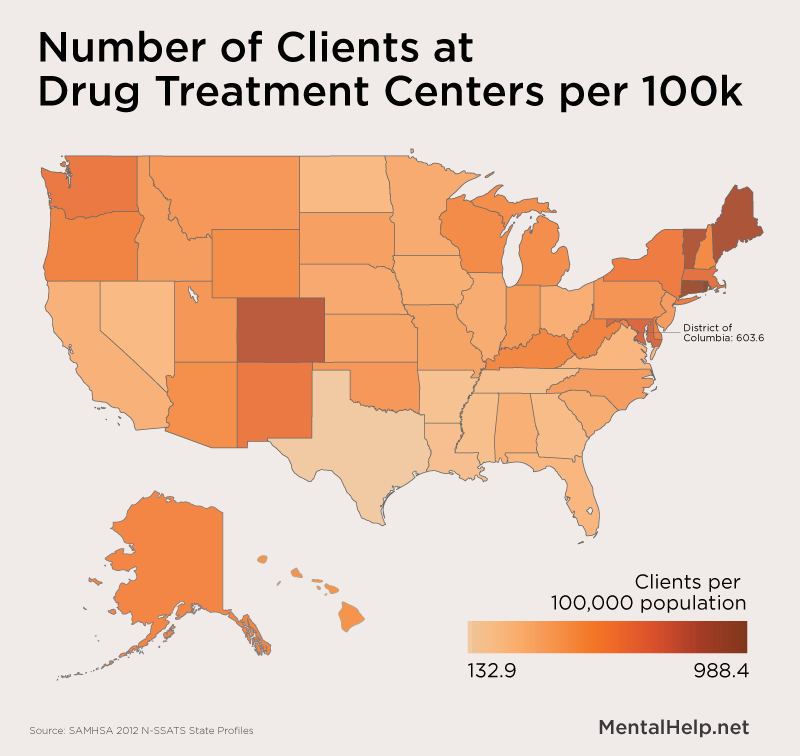 In 2012, there were 1,248,905 clients in drug treatment centers in the United States. On average, this means that there were 455 people in treatment for every 100,000 people. Drug abuse transcends all regional boundaries, but some states seemed to have a higher concentration of clients than others. For example, without taking population into account, California had the highest number of clients in treatment; however, when calculating per capita, the results are much different.

Rhode Island had the most clients per 100,000 population at 988.4, followed by Connecticut (925.4), Maine (856), Vermont (853.3), and Colorado (812.1). The states with the least amount of clients per 100,000 people were Texas (132.9), Louisiana (215.1), Tennessee (215.3), and Mississippi (225.2). There seems to be a high amount of clients in the Northeast versus the South. The question arises whether some states have more clients because of higher rates of addiction or whether some states simply have more treatment centers than others and consequently treat more clients (including out-of-state clients). 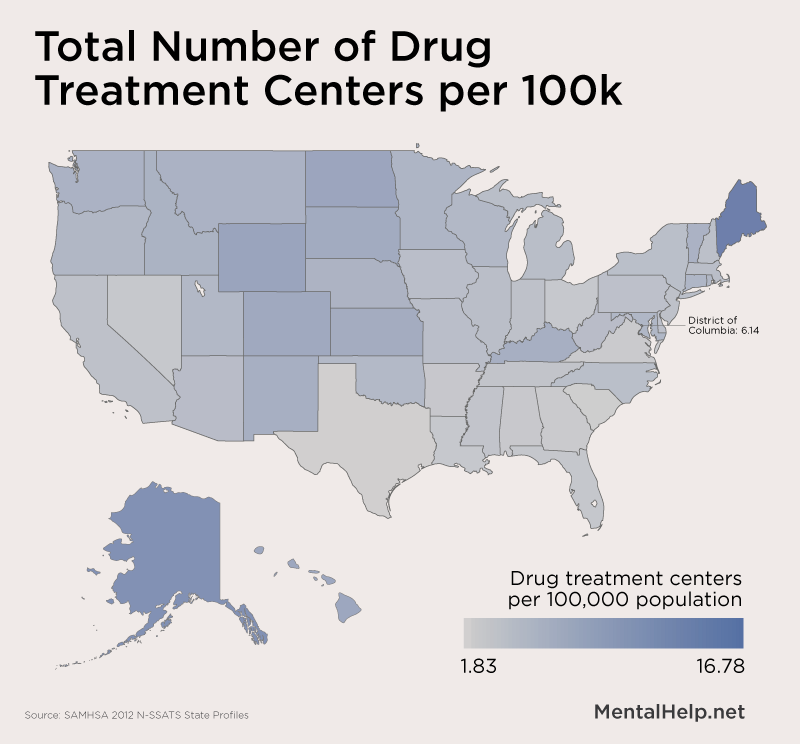 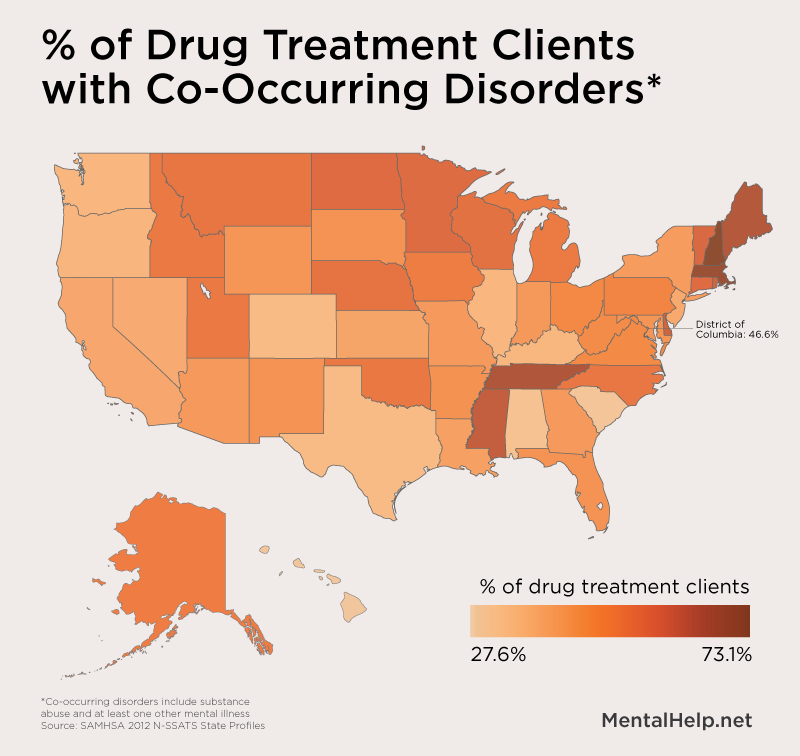 The national average of total clients in treatment with co-occurring disorders is 47.8 percent, which means almost half of those 1.2 million clients had a mental disorder in addition to their substance use disorder. Broken down by state, New Hampshire had the highest percentage of these clients at 73.1 percent, followed by Massachusetts (70.1 percent), Tennessee (65.3 percent), Maine (64.5 percent), and Mississippi (62.2 percent). The states with the lowest percentage of co-occurring clients were Hawaii (27.6 percent), South Carolina (29.8 percent), Alabama (31.1 percent), Colorado (33.8 percent), and Texas (34 percent). 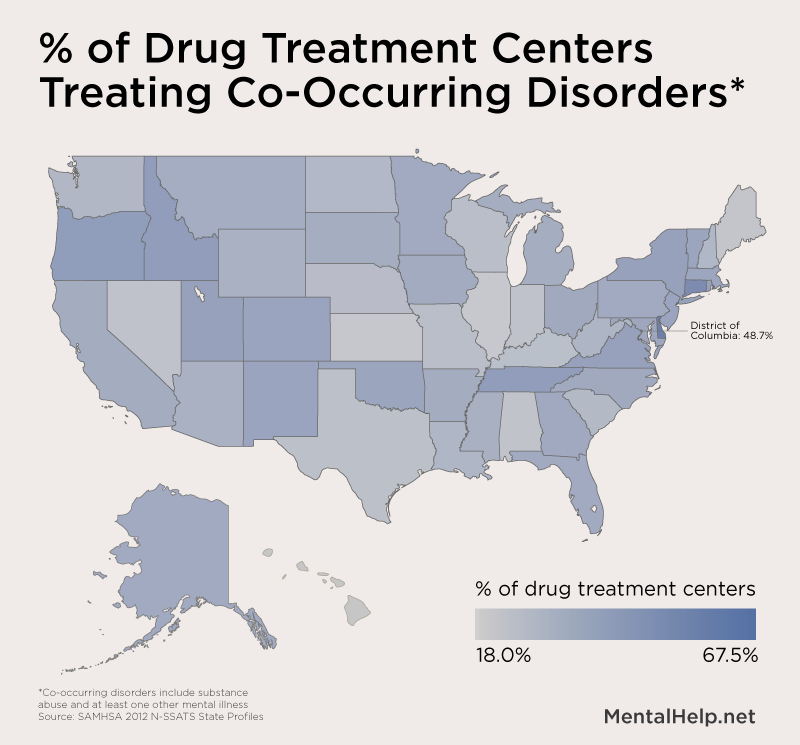 Nationally, only 37.13 percent of treatment facilities had programs to help those with co-occurring disorders. This treatment may involve treating both disorders separately or addressing them simultaneously; although the literature suggests that to effectively treat comorbid disorders, health care professionals must treat both at the same time.

The U.S. has a high rate of individuals suffering from both mental and substance use disorders. Intuitively, the prevalence of this combination makes sense: Mental illness and drug abuse are linked either by correlation or causation; the individual could be self-medicating with drugs to alleviate symptoms of a mental disorder, or the substance use disorder could exacerbate an existing condition or elicit an entirely new mental disorder.

This wide-reaching issue requires a comprehensive approach to addressing both disorders in tandem. Anyone seeking help for either disorder should be screened for both and treated accordingly, which may involve changes at public policy levels in order to reform how the mental health and treatment industry treats comorbid disorders. Regardless, there is hope for those with mental and/or substance abuse issues. If you or someone close to you is grappling with the dual conditions of substance abuse and mental illness, and would like more information about addiction treatment options, visit MentalHelp.net or call 1-888-993-3112Who Answers?.

We used the most recent SAMHSA data, including the 2013 National Survey on Drug Use and Health, the 2012 Treatment Episode Data Set (TEDS) report, and the 2012 N-SSATS state profiles, to compare mental illness with drug use. The state profiles were used to map clients and treatment centers. For the per-100,000-residents calculations, we divided total population counts in 2012 by total clients and treatments and multiplied by 100,000.

MentalHelp.net provides informational resources for a variety of mental health issues, behavioral addictions and substance use disorders, and creates unique and exclusive research to explore topics relating to these topics in novel ways. In addition to such goals, MentalHelp.net connects those affected by these conditions with treatment providers that fit their unique needs.

The use of any images featured above is encouraged, but please link to MentalHelp.net so your audience may have access to all available assets as well as the methodology and various resources that MentalHelp.net provides.