What is Adderall Rehab Aftercare? 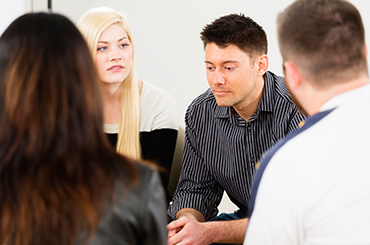 'Aftercare' refers to the continued services that are offered to recovering substance abusers after a structured treatment program ends. The initial phase of treatment, commonly referred to as detoxification, is aimed at stopping the use of the drug of abuse under supervision with the aim of making abstinence safe and distress free. However, the treatment of addiction does not end at detoxification and it is important to ensure continuity of care in the form of 'aftercare'.
Aftercare support can lead to critical improvement in:

The Benefit of Adderall Relapse Prevention

Relapse prevention is an aftercare strategy aimed at preventing and delaying reuse of the drug. Someone who has quit Adderall use is trained to identify the situations and states that can lead to renewed drug use. Also, the individual is supported in developing strategies to deal with these high-risk situations with an aim to prevent relapse.

Relapse rates have been found to be high among those abusing amphetamine-type stimulants with more than 60 percent reusing the drug after a quit attempt. The factors associated with increased risk of relapse are:

The importance of aftercare in management of Adderall relapse prevention is highlighted by the fact that engagement with aftercare services such as self-help groups has been reported to be protective against relapse among stimulant abusers. Aftercare interventions aimed at relapse prevention among amphetamine-type stimulant abusers have been found to be effective in improving long-term outcome over a period of 2-5 years.

Adderall Abuse is a Chronic Condition

Prescription drug abuse is a growing public health problem. Adderall abuse is a chronic health condition that shares many similarities with other chronic medical disorders such as diabetes and hypertension.

The natural course of addiction may extend over years, with periods of remission and relapse. Among those who attempt abstinence, relapse is a realistic possibility. In fact, relapse has been described as a central characteristic of addictive disorders. The road to recovery from addictive disorders is long and setbacks are expected throughout the journey.

However, relapse and return to drug use should not be seen as a failure of the treatment. Drawing parallels between chronic medical disorders and Adderall addiction makes a lot of sense as the two share similar causal paradigm as well as long-term course and outcome. Relapse in the form of reoccurrence of symptoms is observed among in 5 to 7 out of every 10 adults with hypertension. Treatment adherence remains a challenge for both addictive disorders and chronic conditions like hypertension alike. Less than 40% of adults with hypertension are completely adherent to treatment. Retention in treatment is often seen as a major determinant of the outcome for these conditions.

Effective management of Adderall abuse calls for continuity of care. Aftercare services can help improve the outcome by providing support and counseling beyond the initial phase of treatment to help prevent relapse and encourage a sustained drug-free lifestyle.

Cognitive Behavioral Therapy (CBT) has been found to be effective for amphetamine-type stimulant abuse.

CBT—even when offered for a brief duration—has been found to be effective in improving abstinence at six-month follow-up as compared to self-help reading material in a randomized controlled trial.

CBT offered in a residential Therapeutic Community setting has been found to be associated with reduced amphetamine use as well as improved drug refusal and avoidance skills, problem-solving skills, social and stress coping skills, coping with a slip into drug use, and coping with personal high-risk situations.

Similarly, other aftercare interventions such as contingency management (CM) and Matrix Therapy have been found to improve retention in treatment, reduce stimulant use, delay relapse, encourage abstinence, improve employment status and reduce use of other drugs among those with amphetamine-type stimulant abuse.

Additionally, these interventions have been found to be effective among prison inmates and also lead to a reduction in high-risk sexual behavior associated with increased risk of HIV among amphetamine-type stimulant abusers.

Modified, or alternative, step programs that integrate the self-help and mutual support model with elements of CBT—such as Self Management And Recovery Training (SMART recovery)—have also been developed for amphetamine-type stimulant abusers.

Despite this promising lead, there currently are no FDA-approved medications for its long-term management. Medications aside, those with a history of Adderall abuse may require close follow-up with a medical professional because of the associated adverse physical and psychological consequences.

To know more about how health damage associated with Adderall abuse can be addressed in a substance abuse rehab program, contact our treatment support team at 1-888-993-3112Who Answers?.

If you or someone you love have seen their prescription Adderall use turn into a daily struggle, marked by an inability to cope without the drug, it’s time to seek help.

Our treatment support specialists can provide more information on treatment programs and aftercare options at 1-888-993-3112Who Answers?.

Family and significant others play an important role in recovery from Adderall abuse and are encouraged to be a part of the treatment process. Family members stand to benefit by becoming well informed on the issues related to Adderall abuse and its management. Family can be immensely helpful in encouraging recovering loved ones to remain engaged in treatment. Seeing a relative or a friend battle the challenge of Adderall addiction can be challenging. The adverse consequences associated with Adderall abuse extend beyond the user and affect the significant others as well. Family and friends need to be aware of their own psychological and emotional health and discuss their feelings with others. There are self-help support groups for the family members of friends of drug users that you can access.
adderall Related Pages
Show More ▾
Featured Disorders & Issues