What is Valium Abuse? 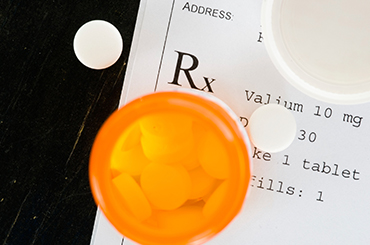 According to the American Psychiatric Association (APA), Valium, the brand name for diazepam, is classified as a benzodiazepine. Benzodiazepines are a class of drugs that lead to sedating, hypnotic (sleep-inducing) and anxiolytic (anti-anxiety) effects.

Therefore, a Valium user would fall under the APA's Diagnostic and Statistical Manual of Mental Disorders, fifth edition (DSM-5) Sedative, Hypnotic or Anxiolytic Use Disorder diagnosis. This is a condition characterized by:

Signs and Symptoms of Valium Abuse

Someone using Valium may:
Immediate effects of Valium use include:

Withdrawal symptoms of Valium include:

Detox and withdrawal from Valium should be medically supervised or monitored. In more severe cases, a user can experience transient visual, tactile or auditory hallucinations, involuntary muscle movement, anxiety and grand mal seizures. Withdrawal effects from Valium and other benzodiazepines when severe, can be quite dangerous.

What are the Effects of Valium Abuse?

Short-term effects of Valium abuse include:

Higher doses can lead to hypotension, which is lowered blood pressure, and respiratory depression, which increases a user's risk of death by choking on vomit.

According to the National Institute on Drug Abuse (NIDA), Valium works to slow down the brain's activity, and when a user stops taking it, there can be a rebound effect. If a user were prescribed Valium to treat anxiety or insomnia, the rebound effect could cause these symptoms to return with increased intensity, lasting anywhere from days to weeks.

Also, if Valium is being used to treat insomnia, taken for more than a few weeks, it may become counterproductive and lead to increased fatigue and tiredness in waking hours.

Combining Valium with other Substances

It is not safe to combine or mix Valium with other medications unless under a physician's supervision. According to a 2009 brief issued by the National Center for Health Statistics (NCHS), about half of all opioid-related deaths in the United States in 2006 involved other drugs, and 17 percent were caused by benzodiazepines.

How are Valium Use Disorders Diagnosed?

A problematic pattern of Valium use leading to clinically significant impairment or distress, as manifested by at least two of the following, occurring within a 12-month period:

Who is at Risk for Valium Addiction?

Although not always the case, those with a family history of alcoholism or addiction can be genetically predisposed to Valium addiction. People who end up abusing or becoming dependent on Valium may have started with a prescription to treat a psychiatric disorder, such as anxiety or insomnia. Outside of a legal prescription, it is possible a person began using Valium to alleviate these symptoms or enhance the effects of other drugs.

When to Seek Help from Recovery Programs

If you believe you may have a problem with Valium abuse and have been prescribed it, it's important to talk to your prescribing physician about the problem. Your doctor has the best resources to treat you for Valium abuse or dependence. 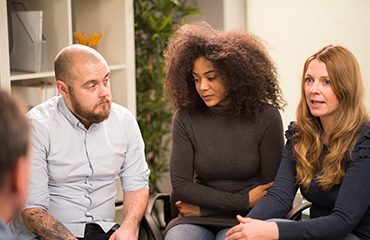 Find Support Narcotics Anonymous uses a 12-step program of addiction recovery. Find a meeting for yourself or your loved one.

If you have a friend or family member who may be abusing or dependent on Valium, you can start by asking if they have tried to stop using Valium and have not been able to do so.

If someone you know has a problem with Valium, but they seem to be in denial, an intervention might be appropriate. Gather facts about Valium abuse and dependence, as well as treatment and recovery options that can be presented to the user. In some cases, Valium users are looking to stop using but are not aware of how to find help to do so.

There are many resources available across the country for treatment of adolescent and adult Valium users. Due to the possibility of seizures and other adverse health effects when Valium is being discontinued, it is important to seek medical treatment during the detoxification process.

After the detoxification process, users can then step into the following levels of care:

Inpatient treatment is a type of residential treatment where the patient lives and participates in treatment at the same location. This is the most intensive way to engage in CBT through groups and individual sessions. Luxury treatment centers are also available for an exclusive, one-of-a-kind experience. Patients can enjoy spa amenities, gourmet meals, and the tranquility of a pleasing environment.

Intensive outpatient (IOP) is usually about 9 hours of treatment each week. This is a lower level of care where psycho-educational lectures and group processing occurs. Partial hospitalization (PHP) is where patients live elsewhere and come to a treatment facility for about 6 hours a day of treatment. Patients continue to engage in CBT at a lower level of care, allowing them to practice what they learn in their daily lives.

A continuing care group requires an individual to participate from 1 to 3 hours every week. This is a process group where members discuss what's happening at this stage in their recovery. Individual therapy is when an individual therapist or addictions counselor can devote attention to the patient using CBT and even hypnotherapy, which uses guided relaxation techniques.

Many treatment facilities seek to incorporate 12-Step programs of recovery, such as Alcoholics Anonymous or Narcotics Anonymous, into their treatment model. It is important to remember that while 12-Step programs of recovery are healing and initiate fellowship, they are not a substitution for therapy if indicated to be necessary. It would not be wise to detox from Valium without the supervision of a physician.

Cognitive-Behavioral Therapy (CBT) is recommended for patients who suffer from anxiety. This is a type of therapy that helps the patient identify and change inaccurate perceptions of themselves and the world around them.

The best Valium addiction treatment plan will systematically target the complex presentations of benzodiazepine abuse and dependency, and cater to your individual needs. Call 1-888-993-3112Who Answers? to find the right Valium treatment program and begin your journey to living a Valium-free life.

According to a 2014 article published by the American Psychological Association, teens who are prescribed anti-anxiety or sleep medications may be up to 12 times more likely to abuse those drugs illegally. The study indicates that a teen may be more likely to steal prescriptions from friends or family members if they run out of their own, or in other situations teens may purchase this medication from a drug dealer.

Teens who are prescribed anti-anxiety or sleep medications may be up to 12 times more likely to abuse those drugs.

Since Valium has sedating properties, teens abusing or addicted to it place themselves in greater danger of:

Valium abuse can also lead to legal consequences, such as driving under the influence or illegal possession without a valid prescription. According to the 2012 Monitoring the Future Study, 4.5 percent of 12th graders had abused sedatives in a nonmedical capacity.