What is a Twelve Step Group?

Twelve Step groups are entirely composed of recovering addicts; no professional leadership is allowed. The oldest and best known of all the twelve step groups is Alcoholics Anonymous (AA). However, many communities also offer chapters of Narcotics Anonymous (NA), Cocaine Anonymous (CA), and even Marijuana Anonymous (MA). 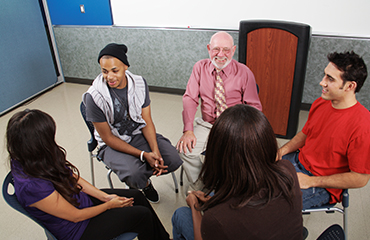 Recovering addicts with long periods of sobriety lead the groups, but any drug or alcohol dependent person with a sincere desire to recover is welcome to attend.

Because addiction knows no class boundaries, members in any given twelve step group are drawn from all walks of society including rich and poor (In fact, twelve step groups may be one of the most democratic institutions in the entire world).

As the word "anonymous" in their names implies, these groups are concerned about keeping their members' identities and what they have to say anonymous. The rule is "what is said in the rooms, stays in the rooms".

Here are the Twelve Steps in the original form from Alcoholics Anonymous. Groups that are focused on drugs reword them a bit but retain their essential meanings.

The ideal of a Twelve-step group is that each of it's members grows to believe and then live through deeds each of the twelve steps.

Submission to a Higher Power

As is readily apparent with even a quick glance, the steps are based firmly in principles of submission to a higher power, the asking of forgiveness for wrongdoings, and efforts to make amends for wrongdoing. The men who founded AA were Christians, and the message of their twelve steps is steeped in Christian concepts of sin and repentance. 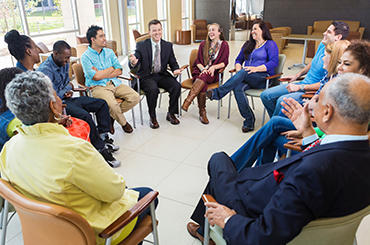 While this message is eagerly received by many drug and alcohol dependent persons, (and rightly so - because it is practical; it works to help sustain abstinence and to promote healing and recovery), there are many other people who rebel against the idea of submission to authority in any form and who come to resent the 'preachy' quality of some AA group members. Some use their disenchantment and discomfort with twelve step groups as an excuse to avoid attending. This is a shame.

The twelve steps require submission to a power higher and greater than ones' self. This power need not be God - it can instead be submission to 'Good Orderly Direction': the idea that it is literally impossible for ones' self to stop drinking or drugging, so long as one clings to the idea that they can ever again take a drink or drug, and must now change the way one lives to avoid alcohol and drugs.

Preachy AA members aside, AA offers a deep and valuable method to remain drug and alcohol-free, regardless of your beliefs in God or your position about authority. The best clinical advice possible is to attend AA or a related group frequently, (Daily is not too much!) and work the steps as best you can. If preachy members get in your way, find a different meeting that isn't so preachy.

For those who truly cannot tolerate the religious basis of AA and like-minded groups, there are alternative organizations to the twelve step groups in existence (such as Rational Recovery and SMART Recovery) that are founded on more humanistic principles. Unfortunately, such groups are much less common than AA-style groups and usually are only present in major metropolitan areas.

Twelve step participants are helped in learning and acting out the steps by a sponsor, who is a same-sex recovering person with sober time under his or her belt. 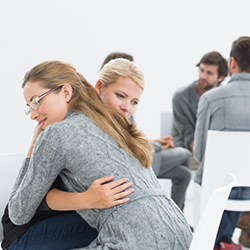