Authors: Rashmi Nemade, Ph.D., Natalie Staats Reiss, Ph.D., and Mark Dombeck, Ph.D.
Recall our earlier discussion of neurotransmitters, synapses and receptors? This may be a good point to review that information, as in the following sections we will be discussing how the various families of antidepressant medications are thought to affect these neuronal systems. 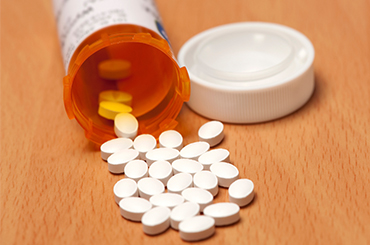 The Selective Serotonin Reuptake Inhibitors, or SSRIs for short, are a popular family of antidepressant drugs frequently prescribed today. Selective serotonin reuptake inhibitors are thought to work by slowing down the reuptake of neurotransmitter molecules (in this case specifically serotonin molecules) by pre-synaptic neurons. Because serotonin reuptake is prevented, serotonin molecules end up staying in the synapse longer than they normally would, and get more of a chance to activate the post-synaptic neuron. There are several types of serotonin receptors, and some medications work on specific receptors better than others.

Fluoxetine (Prozac) is used for the treatment of major depressive disorder, obsessive compulsive disorder (OCD; a person experiences obsessions, or repetitive uncontrollable thoughts, and compulsions, or repetitive uncontrollable behaviors such as repeatedly washing one's hands), bulimia nervosa (an eating disorder characterized by binges and vomiting), and panic disorder (an anxiety disorder accompanied by feelings of terror that strike suddenly and repeatedly with no warning) with or without agoraphobia (anxiety about being in situations from which escape might be difficult or embarrassing).

Prozac used for the treatment of premenstrual dysphoric disorder (mood changes associated with the menstrual cycle), is packaged as Sarafem (fluoxetine hydrochloride).

Side effects of Prozac include:

Prozac should not be used in combination with monoamine oxidase inhibitors (MAOIs), which are another type of antidepressant medication, or thioridazine (a medication used to treat psychotic disorders, severe depression or anxiety, or severe behavior problems in children).

In addition, people should be careful about using Prozac in combination with NSAIDs (pain medication such as ibuprofen), aspirin or other drugs that affect blood coagulation since this increases the risk of bleeding.

There is also a risk of developing Serotonin Syndrome, a cluster of uncomfortable and potentially dangerous side effects including agitation, hallucinations, coma, chills, headache, fluctuations in blood pressure, rapid heart beat, raised body temperature, nausea, vomiting, diarrhea, profuse sweating, confusion, and restlessness. As a result, people taking Prozac should avoid taking other medications that affect serotonin such as triptans (used for treating migraines), tryptophan (5-HTP, a dietary supplement used for depression), linezolid (an antibiotic used to treat infections), tramadol (used for pain), St. John's Wort (an herb used for depression), or other SSRIs/SNRIs.

Side effects of Zoloft include:

As with Prozac, Zoloft should not be used with MAOIs or thioridazine. In addition, people taking Zoloft should not take pimozide (Orap), a medication used for the treatment of Tourette's Disorder (characterized by motor and oral tics). Zoloft may also affect a person's lithium levels (used for the treatment of bipolar disorder), so close monitoring may be necessary. There is also a risk of Serontonin Syndrome when taking Zoloft.

Paroxetine (Paxil) is used for the treatment of major depressive disorder, social anxiety disorder, OCD, panic disorder, generalized anxiety disorder (GAD; an exaggerated or unfounded state of worry and anxiety, often about such everyday matters as health, money, family, or work ), and PTSD.

Citalopram (Celexa) is used for the treatment of major depressive disorder.

As with the above medications, people taking Celexa should avoid MAOIs, thioridazine, pimozide, NSAIDs, aspirin, or other drugs that affect coagulation; and watch for signs of Serotonin Syndrome.

Escitalopram (Lexapro) is used for the treatment of major depressive disorder and GAD.

As with the above medications, people taking Lexapro should avoid MAOIs, thioridazine, pimozide, NSAIDs, aspirin, or other drugs that affect coagulation; and watch for signs of Serotonin Syndrome.

Practically speaking, SSRIs are easy to use. They are taken only once a day, which increases the likelihood that people will comply with treatment and take their medications. They are available in pill form and sometimes as liquids. The pill form is most often prescribed.

As with any medication, the risk of overdose is always a possibility. Overdose can cause vomiting, seizures, and even death, particularly when people mix SSRI's with other drugs or with alcohol. In general, reports of overdose with SSRIs are rare, and SSRIs are considered fairly safe medications. To reduce the risk for overdose, your physician may write you a prescription for a small quantity of medication at a time, which will require that you refill your prescription frequently.

Increasing a depressed person's amount of serotonin in their brain does not always improve their mood. Some depressed people also need help increasing levels of additional neurotransmitters such as norepinephrine. Often, people who don't respond to SSRI's will receive a trial of newer antidepressants that also target other neurotransmitters that impact mood.