The classic symptoms of Major Depression are described in the Diagnostic and Statistical Manual of Mental Disorders (DSM-IV-TR)*, the widely accepted standard guidelines for psychiatric diagnoses. Symptoms associated with Major Depression cause clinically significant distress and impairment in social, occupational, or other areas of functioning. 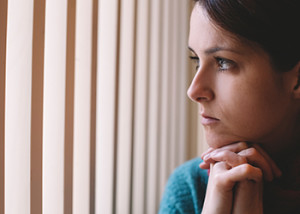 A person is diagnosed with Major Depressive Disorder (MDD) when they experience five or more of the following symptoms nearly every day for the same two-week period, and at least one of the symptoms is depressed mood or loss of interest or pleasure:

Depressive symptoms can vary tremendously from one individual to the next. While one depressed person may experience feelings of sadness, hopelessness, and helplessness, another may feel angry, irritated, and discouraged.

When Major Depression is severe, people may experience psychotic symptoms, such as hallucinations and delusions.

Delusions are very strongly held false beliefs that cause a person to misinterpret events and relationships.

When someone is depressed and experiencing psychotic symptoms, the content of hallucinations and delusions is usually consistent with a depressed mood and focuses on themes of guilt, personal inadequacy, or disease.

Video: What is Depression?

Below is a TED Ed video by Helen M. Farrell on the symptoms of depression, its possible causes, and a few available treatment options.

*Note that the DSM-IV-TR has been recently updated by the American Psychiatric Association to the DSM-V. The criteria for MDD has remained essentially the same.