The History of CBT

Both Beck and Ellis began working on their versions of the therapy in and around the late 1950s and early 60s.

Both versions of the therapy are founded on the single basic idea that cognition, in the form of thoughts and preconceived judgments, precedes and determines people's emotional responses.

In other words, what people think about an event that has occurred determines how they will feel about that event.

Depression happens because people develop a disposition to view situations and circumstances in habitually negative and biased ways, leading them to habitually experience negative feelings and emotions as a result.

Therefore, if a person changes their thoughts and behavior, a positive change in mood will follow.

Core beliefs are fundamental assumptions people have made that influence how they view the world and themselves. People get so used to thinking in these core ways that they stop noticing them or questioning them.

Core beliefs serve as a filter through which people see the world. Core beliefs influence the development of "intermediate beliefs," which are related attitudes, rules and assumptions that follow from core beliefs.

The cognitive aspect of CBT involves learning to identify these distorted patterns of thinking and forming judgments.

Intermediate beliefs can influence people's view of a particular situation by generating "automatic thoughts," the actual thoughts or images that people experience flitting through their minds. 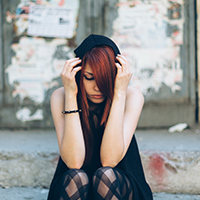 Because the automatic thought "he hates me" is allowed to stand unchallenged, our depressed person starts feeling hated, and thus depressed.

Dysfunctional beliefs are thinking habits that people learn which happen to be irrational and not based on reality (e.g., on objective, unbiased observation). Because such beliefs are not linked to reality very well, they tend to appear rather distorted when compared with reality.

Distorted though they may be, dysfunctional beliefs are all people typically have to help them make sense out of the events that happen to them. Snap judgments are made (called Cognitive Appraisals) based on the assumptions present within dysfunctional beliefs, and those judgments end up being, not surprisingly, biased and irrational.

People look to their appraisals of stressful situations to know how to react, and when they do, they see that situations look simply awful (worse than it really would appear if some reality testing were to occur). They react to that false or exaggerated sense of awfulness and correspondingly, experience depressive symptoms.